Ottoman Women and their Patronage of the Arts.

The Ottoman Empire spanned over six centuries (1281-1924) and reached its peak during the reign of Suleyman the Magnificent (1520-1566). During this period the general concensus in the west about women in the empire, particularly Moslem women, is that they were subserviant creatures who were not allowed a voice. This is far from true, especially of those in the upper echelons of society where women played an important role in overseeing the household and in the patronage of the arts, particularly architecture and textiles.

In contrast with their counterparts in the west, whose social status was viewed through active participation in the public arena, Ottoman women did lead a more secluded life but this in no way diminished their individual power in the involvement in the empire and the arts.  The harem and the practice of seclusion were important aspects of upper class Ottoman life whereas the poor worked side by side. Seclusion therefore was not solely a female experience but a demonstration of power and wealth. Family politics and the close proximity to the sultan himself was what determined power. Within this structure, women played a vital role. Female patronage began shortly after the Ottoman conquest and whilst motherhood was always the most important role for a woman, when they had finished their child-bearing years, they were free to serve for the public good.

At the top of the hierarchy was the sultan’s mother, the valide sultan. It was she who held the greatest influence, especially over her sons. She also played an important role in state affairs between rulers. The valide sultan was so powerful that the later ottoman period has been referred to by someone as ‘The Age of Women’. After her, the next most important woman in the palace was the Haseki or the sultan’s favourite concubine. The royal concubines came next followed by the princes and princesses. A stipend was given according to the hierarchy. Apart from the immediate family, the sultan’s wet-nurse, the daye khatun, was also considered an important family member. Together with the harem stewardess, the khunda khatun – the woman who to all intents and purposes administered the day to day running of the women in the palace – they were highly respected and both not only received high stipends but were also free to patronise charitable works of their own.

From the very beginning the rulers of the elite class not only spent money on their own private palaces but also on public buildings such as madrasas, hospitals, hammams (bathhouses), caravanserais with waafs (endowments) to demonstrate their religious commitment and political status. Architectural patronage in particular was viewed as an important pious act and the benefactor would earn rewards in heaven and wealthy women played a great part in committing themselves to the good of the people. The legacy of these beautiful buildings can still be seen today throughout the former empire from the finest mosques to bridges and fountains, Textiles were the other area where women played a dominant role. Carpets, textiles, silks and luxury goods all added to the economic wealth of the empire and through embroidery and spinning in particular, this was one way they could gain power and independence in a male dominated world.

“The First Day of School” by Jean-Baptiste Vanmour

Embroidery was produced in workshops, factories and by domestic women working in the homes. Whilst patronage from the Palace was vital, it was the latter that was by far the largest group because the women producing this work often worked individually to help support themselves. In turn, this gave them authority and respect in the community. Embroidery played an important role in the education of young girls in the empire and small informal schools were set up to encourage this skill. Weaving and spinning was also taught from an early age. These schools allowed women to socialize and become productive members of the society. Women were also identified in the society by their class and religion and so they took great pride in their appearance and invested a great deal of effort and time was in these skills.

The first and most powerful woman of the Ottoman dynasty was Hurrem Sultan 1502 –1558, also known Roxelana. She was the favourite consort and first concubine in the empire to legally marry a sultan – Suleyman the Magnificent – and was the mother of  Şehzade Mehmed, Mihrimah Sultan, Şehzade Abdullah, Sultan Selim II, Şehzade Bayezid and Şehzade Cihangir.  Hurrem (meaning “the cheerful one”) was one of the most influential women in Ottoman history and a prominent figure during the era known as the Sultanate of Women. Whilst there were earlier female patrons of the arts, none had made such important contributions as Hurrem. Her status and power was unprecedented at the time and when she died in 1558, she left a legacy that would inspire other royal women for the next few centuries.  Her most important architectural contribution is the large, centrally located Haseki Hurrem Kulliye in Istanbul, built in 1540. It comprised of a mosque, various religious schools including a Quran school and a soup kitchen (imaret). A few years later, she added a hospital and a double hammam.

Hurrem and Suleyman’s daughter, Princess Mihrimah Sultan also followed in her mother’s footsteps in devoting a large part of her wealth to charitable foundations and architectural complexes. The mosque at the entrance to Edirne was designed by the great architect, Sinan, widely known at the time for his innovative architecture. This complex, which is situated amongst beautiful gardens and courtyards, comprises of a mosque, double hammam, imaret and madrasa. The combination of exquisite design and its position at the top of a hill, which adds luminosity, make it one of the most outstanding architectural buildings of the day. 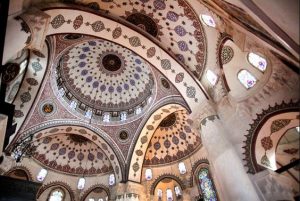 Safiye Sultan was the mother of Mehmet III (1595-1603). As the valide sultan, her life and works mark the beginning of the “Reign of Women”, a period that would last for almost one hundred years during which women were arguably the most powerful members of the royal palace. Safiye is responsible for the great Yeni Valide Mosque in Istanbul, a dominant landmark next to the Galata Bridge. Unfortunately, family politics came into play and after Mehmet III died, Ahmed I took over and sent her away from the palace, leaving the mosque unfinished. The project was completed by Ahmed’s widow, Kosem Maypeker Sultan. Palace intrigues and family politics again entered the fray, and the building was disrupted once more when Kosem was killed by her daughter-in-law, Hatice Turhan Sultan, who completed the project in 1665.